Home / The Lumar Blog / Best Practice / What to Know Before Migrating Your Site: Common Website Migration Issues & How to Avoid Them

What to Know Before Migrating Your Site: Common Website Migration Issues & How to Avoid Them 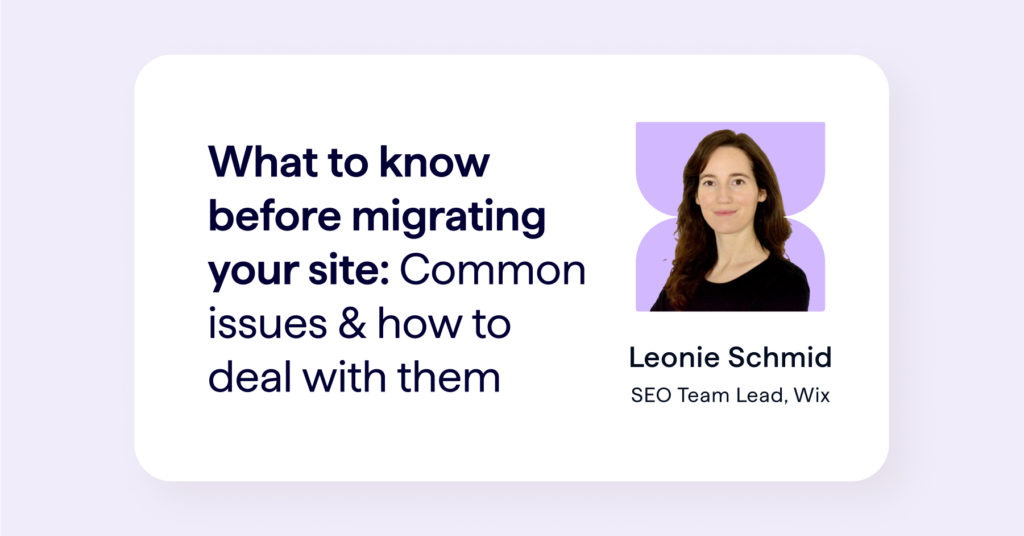 Some SEOs love the challenge while others dread this task. Either way, if you’ve been in the industry for a while, or if you work for a large international site, it’s likely you will come across a site migration sooner or later—so it’s best to be prepared.

Working at a company like Wix and managing SEO for our large-scale international site with millions of organic clicks every month has been exciting and challenging. My team and I have dealt with all kinds of site migrations over the years. I love these projects because none is like the other and I learn something new every time.

But, over the years, I’ve noticed how much room there is for mistakes to happen when migrating a site. To help you avoid these mistakes, this article highlights some common issues you may encounter during a migration and outlines how to avoid them so that your next migration goes smoothly instead of potentially hurting your organic visibility and traffic.

Common reasons for a site migration

A site migration can include everything from URL structure changes and design updates to moving to an entirely new content management system (CMS) or domain. Here are some common site migration scenarios:

Common site migration issues and how to avoid them

Luckily, with careful planning and consideration, most issues can be successfully dealt with or even avoided completely.

Poorly implemented redirects can confuse users and might be seen as a soft 404 error by Google. This can occur if, for example, you redirect a large quantity of old URLs to an irrelevant page, such as the homepage of the new site, instead of using 301 redirects on a page-by-page basis.

Another pitfall is using a client-side JavaScript (JS) redirect instead of a 301 server-side redirect. While users will be properly redirected to the new location with this approach, Google often can’t pick up on JS redirects, causing severe indexing issues and, in all likelihood, traffic and revenue loss.

While Google officially supports JS redirects and it follows them in a similar manner to how it follows server-side redirects, this is not something you should rely on.

In my experience, Google often will not/can not follow these redirects for various reasons: It is possible that rendering may fail, Google’s algorithm may decide not to render the JS, or performance issues prevent Google from picking up on the JS. These issues mean that the JS redirect will not be executed and Google might never see it. In addition, rendering JavaScript requires a lot of resources and may slow down the crawling and indexing of your website.

This particular issue is so dangerous because, if it happens, you will probably only notice it after the damage has been done. The good news is that this typically only happens if SEOs are not involved from the start.

Screenshot of traffic drop after improper redirect setup (JS redirects instead of ss 301):

How to avoid improper redirection:

Although it is part of every good migration checklist, this one is often neglected. Yes, there are redirects in place so Google and users will end up in the right place. However, Google uses internal links as a strong signal and the fewer updated links there are, the harder it is for Google to understand the new location of the URLs and it will take longer for them to switch in the index. In addition, internal redirects (caused by links that are not updated) add additional latency to page load times and could also have a negative impact on crawling.

How to preserve your internal links:

A staging environment, where you can test redirects and audit the new site, is a must for any large migration. Unfortunately, the testing environment often gets forgotten about and the test site may be accessible to search engines—one accidental link somewhere and search engines will happily follow that link to crawl and index this “new” site of yours. You want to avoid this as it can cause duplication but also, once indexed, visitors could find this testing environment. And, depending on the size of the site/section and where it sits, it could potentially cause crawl budget issues as well.

How to prevent Google from indexing your test site:

Issue 4: Forgetting about images and other non-HTML assets

This is a common pitfall you want to avoid, especially if you generate a lot of traffic from non-HTML assets. Media is crucial and images, videos, PDFs and so on can drive a lot of traffic and revenue. If, for example, you change your image URLs and don’t redirect them, traffic from image searches will decrease. You can check your image traffic beforehand in Google Search Console (Image Search) to get an idea of how much traffic you are currently driving from images.

How to migrate your non-HTML assets:

Issue 5: Introducing too many changes at once

Migrations are sometimes seen as an opportunity to make additional site changes. The reasoning is that there are already a lot of resources dedicated to a site move, so why not also tack on some extra tasks, like design or URL structure changes, as well?

While piggybacking on site migrations to perform other needed changes may seem like a natural move (or even a necessity), it can also introduce risks. Lots of moving targets means that later on, if a problem pops up, you don’t know if it is the new URL structure, new technology, new content, the site move itself, or a penalty that is causing the issue.

How to avoid introducing too many changes at once:

Sometimes, and for various reasons, it is not always possible to avoid making numerous changes at once during your site migration. If you must make numerous changes during this crucial period, you can mitigate risk by meticulously planning and strictly following a good checklist that includes pre- and post-launch checks. It is also important to begin monitoring your site’s key metrics several weeks/months before the migration.

In addition, and maybe even most importantly, you need to make sure that stakeholders are aware of the risks that come with introducing more changes. Then, if traffic drops, your organization will understand that it might be hard to pinpoint the exact causes and will be willing to implement fixes quickly.

Refer to the ‘additional migration tips’ section towards the end of this article for more advice that can help you avoid some of the potential pitfalls of extra site changes during a migration.

Due to server maintenance, among other reasons, some may decide to drop their redirects a short time after the migration—sometimes, too short! It takes time for Google to crawl a site and understand/accept redirects—the larger the site, the longer it takes. Although Google generally slows down crawling for redirected pages, it still crawls them (on and off) for years to come. Also, third-party links to the old location may still be out there; these can’t be updated and you don’t want to break them by removing your redirects too soon.

How to avoid issues associated with prematurely removing redirects:

We’ve looked at a few key site migration issues and how to deal with them. While these are all serious issues that commonly occur, it is important not to panic when you notice a problem during or after your site migration process. Slight traffic fluctuations are normal during a migration (though steep traffic drops are not). There is a solution for nearly everything and, even with the most successful migrations, some short term traffic fluctuations are to be expected. If you see a gradual traffic transition from old to new, you are on the right track.

There are, of course, other issues that can occur during migrations as well. Following the general advice below can help decrease the risk of running into any additional issues.

In this article, we’ve looked at all kinds of issues, and while there are many things that can go wrong in a migration, I am also here to tell you not to worry. If you handle a migration with the respect it deserves, practice careful planning and execution, and are aware of potential issues, they can definitely be avoided and your migration will be a success.

Leonie is the SEO Team Lead at Wix.com and a guest writer for Lumar's blog.