Webinar Recap: App Store Optimization — how to do an ASO audit in 5 simple steps

How can you better optimize your app store listings and drive more downloads? We welcomed Luis Bueno, SEO and ASO specialist, to discuss how app makers can secure more downloads with the right optimizations. 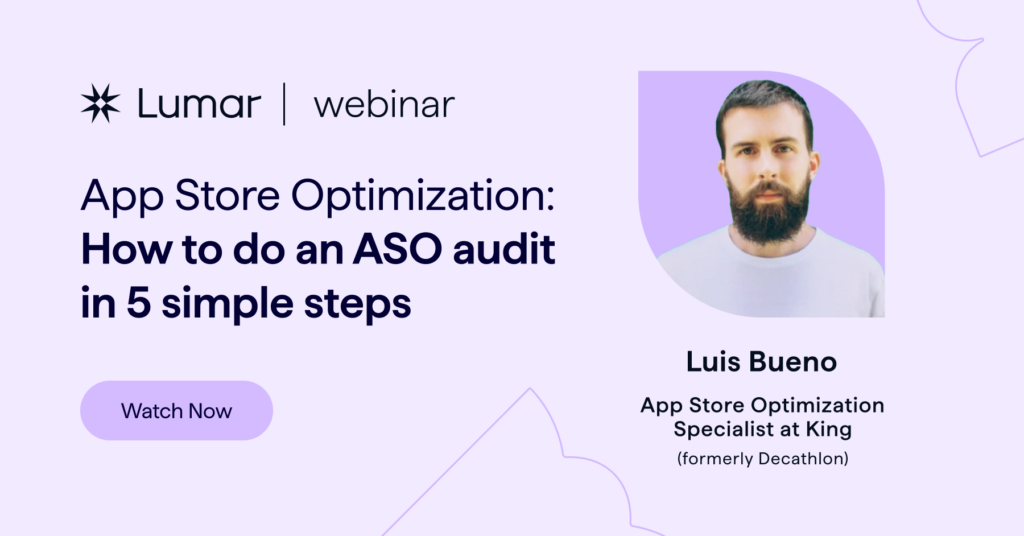 Our latest webinar is a deep dive into App Store Optimization (ASO). (Note: This webinar was recorded just before our new brand launch and the announcement of our new name, Lumar, so you may notice some ‘vintage’ Deepcrawl details!)

We welcomed Luis Bueno, SEO and ASO specialist at app developer King to discuss how app makers can secure more downloads with the right optimizations.

Watch the full video above (including Q&A session), or read on for some key takeaways from the session.

What is App Store Optimization (ASO)?

Bueno’s work at King involves app store optimization for both general apps and gaming apps. When it comes to ASO, he notes a number of key differences between the two app types.

Broadly speaking, non-game apps are aimed at users who need to solve a problem. The technical features of these apps are usually the main focus in their app store listings. Engagement is usually judged on how frequently they are used. And when users search for them, they often input the business type or the real-life need they have.

In an effort to appeal to gamers, gaming apps see a lot more focus on the in-game experience. Engagement for game apps is more about the length of time that users spend during gaming sessions in the app. And those searching for games often start with a genre-related keyword.

“In terms of conversion optimization,” Bueno says, “You should explain to the user how your app resolves a problem. When we do conversion for games, the focus is about entertainment – the games modes, the characters, and the mechanics.”

The initial question Bueno asks here is: Who is your app for?

He cites gaming app Mystery Match Village as an example.

“By playing the game, looking at the creatives, and the reviews, you can get an idea of the target audience – in this case it is probably middle-aged women,” Bueno says. “Then you can use some ASO tools to understand which countries the app is downloaded in the most.”

Beyond these top-level demographics, he also looks at user motivations. Mystery Match Village is clearly geared towards gamers who like to solve puzzles and complete challenges.

Bueno will then conduct some competitor analysis – highlighting similarities and what sets his own app apart.

When drilling down into app features, the questions start to differ depending on whether we are looking at non-gaming or gaming apps. According to Bueno, the best way to find out is to download the apps and actually use them.

For non-game apps, he looks into their main features and asks: What does the app enable you to do? As for games, he asks: How’s the in-game experience? What is the in-game content? And what’s unique about the game?

“The icon is the first element the user sees,” Bueno says. “Often it’s the only one as it appears in searches and in charts.”

He points to frequently-used contrasting background colours and logos (for example, Snapchat) and notes how sometimes they can promote associations with activities or include the name of the app.

Game icons, on the other hand, are often a character-based. They might also feature game elements or the brand (as we see with Grand Theft Auto).

Screenshots are also part of the first impression users get of apps in the app stores.

“In Google Play, for example, the screenshot can have a higher impact than the icon, so it’s quite important.”

He points to the driving and navigation app Waze, which uses its screenshots to make the value proposition clear – i.e. get to your destination quicker and without problems. It also includes other features, such as the speedometer and the app’s functionality to find gas stations or carparks.

In gaming apps, screenshots are an opportunity to show off the action and gameplay. Here, Bueno gives the example of Clash Royale, which, in its app listing, details the epic battles available, how you can team up with friends, unlock new cards, and compete in special events.

Another creative element Bueno highlights is the app’s feature graphics.

This is only relevant to Google Play ASO, but is important because it can impact conversion.

He notes how these graphics are usually aligned with the brands and other key visuals. Fast food apps are good examples – as they frequently foreground the delicious food that can be purchased via the app. When it comes to games, these apps tend to reinforce the unique value proposition or feature the brand name or key characters (see Pokemon Go).

“It’s one of the elements that most impacts conversions for the people who see it,” he says. “It can increase downloads by 20-30%.”

The first 5 seconds of a video in the app store are crucial, according to Bueno. He suggests getting the key message across in that window.

He advises that the video should work well both with and without sound, because they automatically play with the audio muted.

When it comes to metadata, there are key differences between the App Store and Google Play.

According to Bueno, in the App Store, long descriptions are not considered when ranking your app.

“You can be more flexible [in Apple’s App Store]  and don’t need to focus too much on keywords,” he says.

He also advises us not to waste space within subtitles by repeating keywords that are used elsewhere and notes that keywords can be singular, rather than plural.

In Google Play, on the other hand, Bueno says the short description has been historically considered the second most important element (after the title). However, he says lately the trending opinion is that this is more useful for conversion rate optimization.

He advises that we can use CTAs rather than keywords in the short description, with keywords going in the long description instead. However, keyword density will play a role in where Google decides to rank your listing in Google Play.

Bueno then turns to keyword metadata relevancy. Simply put, it is hard to rank for a keyword that isn’t in your metadata. And whether you rank for it at all will depend on how relevant the keyword is in the rest of your app store ad (title, subtitle, description, etc.).

When it come to keywords, Bueno asks 5 questions:

How to get app reviews (and what not to do)

According to Bueno: “Reviews and ratings are the most singular data point affecting the app conversion rate.”

So how should app marketers ask for reviews?

Bueno suggests we follow a where, when, how approach. We should look for the ‘joy moment’ such as after a purchase or at a time that is least disruptive to the user. There are really two options when it comes to how to ask: prompting the user either to rate within the app or on the app store itself.

Bueno also notes a number of triggers which can be used to push for a rating or review, particularly in gaming. These can include firing a review request if the app has been opened a certain number of times, if it has been played for a particular duration, or if the user has moved forwards in their journey (such as leveling up in a game).

Bueno also summarizes what not to do when soliciting users for app store reviews:

These techniques can sometimes result in a product being removed from app stores. But ultimately, ratings and reviews are a great way to leverage good user experience in order to further promote your app, as well as being an opportunity to boost rankings and conversions.

Sharon is a resident wordsmith at Lumar, where she serves as the team’s Content Marketing Lead. With a background that bridges both business strategy and creative writing, she’s enthusiastic about bringing an editorial mindset to B2B communications. When not writing or editing work by an excellent team of contributors, she’s often listening to (and making) podcasts, reading widely, or re-watching old episodes of Poirot. 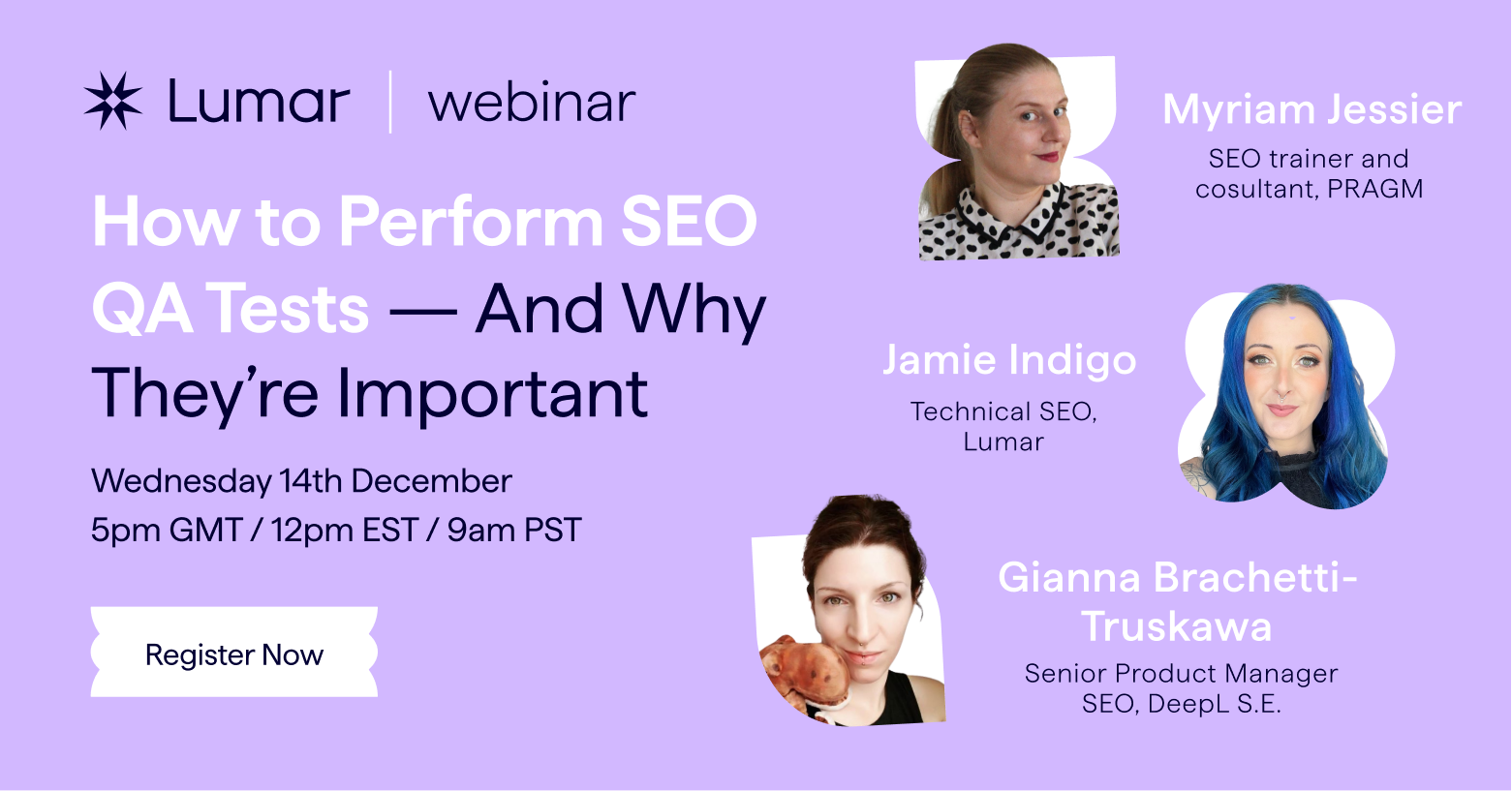 Webinar On-Demand: How to Turbo-Charge Your Digital Content Marketing

Webinar On-Demand: Why Website Intelligence is Integral to Your SEO Strategy